CLICK TO PRINT THIS PAGE
Photo by Steve Alexander, www.temporarytemples.co.uk 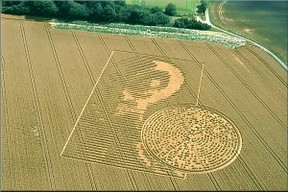 Staring right at us:

We have contact
The Sparsholt Face, August 2002
Palden Jenkins


In all my years of croppying, this has been one of the most fundamental and deeply stirring of experiences, a privilege for which I feel deeply grateful. This is about my subjective experience of the formation - or more correctly, of the 'space' within it.


The picture the formation makes is impossible to distinguish on the ground. Unlike most formations it is not swirled and flowing, but definitely right-angular in the lay of the wheat. The face part is made up of parallel lines of varying thickness, using a 'rasterising' effect to create a subtly shaded image, as seen from above. Steve Alexander (the photographer) told me that, while hovering over it in a helicopter, it was very difficult to perceive exactly what the picture was, so he photographed it from as many angles as possible, and only saw the full picture when the film was developed.

The formation was very energy-dense. When we approached it I was in quite a balanced and calm state. Stepping into the first bit of the formation (its 'frame') I suddenly felt shocked, as if falling suddenly into a deep end, out of my depth. The magnitude of the experience was quick to be felt - a heart-fluttering thing. I felt almost forcibly 'pulled within' and found that, although there were several old friends there, my social skills were zeroed out immediately. It wasn't unpleasant, and I think everyone there was experiencing roughly similar things. As with some other formations, I felt as if I could be seen inside by X-ray eyes above me, read off and monitored. It's as if our normal relativistic universe dissolves, leaving us in empty, wide-open space - though, in another sense, as if we've come home - a bit like landing in a foreign country and feeling instantly familiar with it, even if you don't speak the language.

The 'energy-signature' of the formation was different from others I've been in. In the 'main series' formations over the years, I get quite an intimate feeling of a presence or of energy-fields, but these presences distinctly don't want to tell who they are or what they are saying or doing. It's a bit like being a child watching an adult, without understanding why adults do what they do though nevertheless knowing that there must be some reason and sense to it which is beyond us. It seems that the main point of these is to present us with unanswerable questions which have a deeply transformative effect on consciousness and our sense of reality. An opportunity for communion, a chance to step into 'their' world while remaining on or in 'ours'. It seems clear to many croppies that these beings are not ETs as such, but interdimensional beings of a non-physical yet non-earthly nature. We don't know who they are, but somehow we know them well, and the experience is recognisable, tweaking deep memory, even if unique and entirely new. Then, of course, there are those who are desperate to assert that crop formations are man-made, but, sad to say, that's their problem, and their cosmic constipation will no doubt one day be relieved!

This formation felt like a personal message from a specific being, with a distinct identity 'he' was revealing to us. Sheila said she felt it was a rather shy being, tentatively offering itself to us, to see how we would respond. Clearly, the face in the aerial photos is an ET face - unlike the Face at Chilbolton (six miles from this one) last year, which was humanoid. The picture, when first seen, brings up mixed reactions, but the atmosphere in the formation is undoubtedly friendly and benign.

The Face of 2001 looked straight at us. To me it said 'We are watching/eyeballing you - and we are you watching yourselves'. The 2002 face looks over our left shoulder - and the feeling I got was that it was looking and communicating with our soul, which stands, as it were, just behind us (perhaps because we omit fully to incorporate our core and heart into our worldly lives).

I looked and felt my way around the face part of the formation for a while, but was drawn into the disk - and everyone else was there too, mostly lying on their backs and 'far away'. (It was a bit like a who's who of currently active croppies, actually!). The disk reminds me of psychic experiences I've had, of being given a 'rote ball', a hologram-bundle of multidimensional information which, once given, unfolds itself gradually over time (rather like being given a CD of information to look through, as you find ways of opening the files in it). Settling down close to the centre of the disk, I went inside and felt as if an energy-information download had started to take place. At one point Tulki, my son, spoke to me, and I surfaced, only to feel that the download was half-way through, so I went inside again to complete the download, and a point came where I felt it was complete. A few others verified this experience too. God knows what happens next, with that experience, and today (Sunday), the day following, I'm left wondering what to do with it or, more specifically, what this ET wants of me. It feels totally okay, and a great blessing - and I guess I'll find out!

I opened my eyes at one stage and saw Tulki alone in another part of the formation, just standing there for some minutes, silent and utterly still, staring into space. There was a crackling, crisp aura around him, and he was just being. Later, he came charging toward us waving a few stalks of wheat, as if carrying a sparking antenna or a magic wand, and waving them around. Something in him probably knows more about all this than we so-called adults do.

The 'disk' is made up of a fine spiral, with 'blips' on it which are spaced and sized in such a way as clearly to represent a coded and decodable message - my croppy friend Michael Glickman, earlier in the day, had said "Well, that's given me a winter's-worth of work to do!". Someone will hopefully decode it in due course by linearising the 'track' of the spiral and analysing the patterns and spacing of the 'blips'. Virtually all previous formations (except the Chilbolton 'Face' and 'Code' of 2001) distinctly represent clear patterning, mathematical principles and geometry, while the specific 'message' cannot be interpreted, at least in the language and concepts we currently possess. Yet this seems to be something we can decode, a specific message from a specific source. Some people threaded the spiral of the disk but, frankly, my capacity for physical movement was strongly reduced (until I left the formation, when it returned), so I didn't do that. My body felt like stiffened rubber, stable and grounded, but in another way my motion-connectors weren't wired up and motion was thus reluctant. Subjectively, I felt that each blip on the disk's spiral was not just a piece of information, but a kind of 'file name' to a whole bundle of information in its own right - it felt as if a whole library, not just a statement, was being given. I presume that a series or sequence of insights or life-experiences might follow from here.

This felt to me like a distinct 'close encounter' - a very intimate one, perhaps closer than we can get to our own selves. Interestingly, the face itself, though quite clearly ET, does not seem to be specifically one of the ET faces I've seen in people's drawings of the beings they've met in close encounters. In my own psychic adventures I have not met this kind of being before (though I've met a few). It was not a 'Grey' or a 'Nordic' or anything of that nature - nor humanoid.

Everyone stayed there for a few hours - it was difficult to leave, as if we were already 'home'. While in the formation and reflecting on the experience, I was aware of being a part of history. Perhaps the men who were with John Cabot when he 'discovered' Newfoundland in the 1400s would not have been aware of all that would unfold thereafter, and of the subsequent significance of their landfall (the whole history of USA/Canada). I felt this was similar, as if more will unfold in the centuries to come which will render this event significant in a new light. Of course, this event should be front-page news, but its true significance will hardly be noted or seen publicly. The materialists amongst us might well ask "What has this to do with Iraq, guns, cars and stock markets?" and, although the logical connections are perhaps flimsy, I'd say this event is totally relevant, by dint of its timing and also the larger light it throws on our vexatious human affairs.

'We have contact', and those of us who are open to it, whether or not you can visit the crop formation, need perhaps to send back the signal "Message received with thanks! And we await further developments". I do find myself wondering what I am to do with this gift, though I trust that answers will be revealed in due course. But one immediate conclusion is that I find myself reaffirming my commitment to the life-path I have chosen. Even though it's a ridiculously small number of people involved in croppie research, I feel blessed to be one, to suspend my intellectual neuroses, metaphysical control agendas and fear of madness and the Unknown, or of loss of reputation or friends, and to simply follow this trail.

The crop season is now ending - the combine harvesters are out as we speak - and the formation will probably be gone within days. These things are not built to be permanent. The wheat was crisp and ripe - most people were nibbling at it! However, several of us feel there is one more crop event to go this year. We shall see.

This material may be downloaded, printed out in single copies for personal use and forwarded by e-mail or posted on websites unaltered and with proper attribution and a link to this site. All other uses require permission of the author, Palden Jenkins.
The Archive of Palden Jenkins
| Books | Radio | Articles | Websites | More |
www.palden.co.uk
Privacy note: I'm not interested in your private data. This site collects stats of general traffic only. There's no capturing, mining, storing, sharing or selling data here. I don't keep a mailing list either. I'm happy you're here. Any issues, please contact me. Enjoy your visit!
Back to content